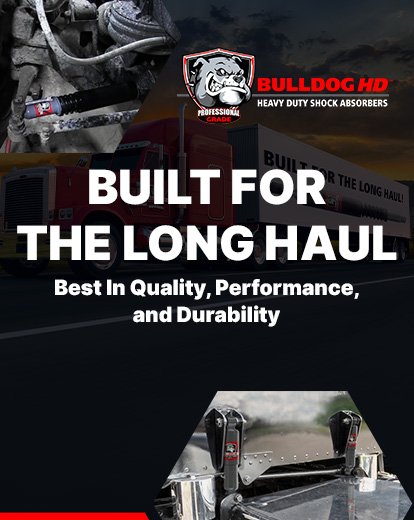 Shock absorbers for tractor-trailers are built to be tougher than those found in passenger vehicles. But, if you’re running more than one rig, nothing else compares to Bulldog Shocks. Based in Loris, SC, Bulldog HD Shocks is a leading aftermarket specialist in heavy duty shocks and suspension components for fleet applications. The brand is a division of DMA Sales LLC, a major North American aftermarket parts supplier whose portfolio also includes strut assemblies, coil springs, dampers, lift supports, and other related products. It maintains distribution centers in the West and East coast, covering a total of 1 million sq. ft. of space.

Bulldog shock absorbers are unique in that they are built from the ground up in partnership with fleet maintenance technicians of various fleet vocations across North America. Root causes of premature shock failures that commonly plague fleet vehicles are identified and addressed with improvements on existing technology or even entirely new innovations in materials, design, and fabrication. This results in shocks that are not only durable enough to withstand the rigorous demands of the linehaul industry but are also easier to maintain, provide a longer service life, and make a better return on investment overall.

The heavy-duty shock absorbers from Bulldog are the result of years of development in cooperation with the fleet maintenance community. These shocks are described as the best of its class, addressing the root causes of premature failure in commercial vehicle shocks and fixing them with new and improved designs and material choices.

Steering dampeners are often exposed to the most extreme abuse than other suspension components in a commercial vehicle. This is especially true for vocational applications like dump trucks and cement trucks, as these vehicles experience severe failure rates in their dampeners within a short period of time. This is why Bulldog’s steering dampeners are built to withstand a wide range of grueling working conditions. A typical Bulldog dampener has been tested to last an average of 180 days of constant use until requiring servicing, compared to just 90 days for OEM dampeners.

Bulldog steering dampeners have also been recently redesigned for increased durability, for improved steering control, and with fewer parts to replace for additional cost savings.

Bulldog’s heavy duty cab shocks are designed to stabilize the truck cabin, especially when traveling through uneven road surfaces. This increased stabilization creates a safer driving environment as well as less driver fatigue. Also, the less shaking and vibration that reaches the cab, the quieter your drive will be.

Combining the best in materials and technology the industry has to offer, Bulldog heavy duty shocks and dampeners offer clear advantages that you won’t find in other similar products:

Bulldog also has the edge over the competition by manufacturing all of their product’s key components in-house using state-of-the-art equipment. Robotic in-line welding ensures consistent quality and significantly reduced risk of defects, with its 360-degree interior and exterior eyelet welds rated as among the best in the industry. All shocks and dampeners are also fitted with bushings fabricated in-house. In addition, all Bulldog parts also undergo multiple-speed cycle dampening force testing and end-of-the-line function testing to guarantee the final product meets Bulldog’s best-in-class standards.

Bulldog remains one of the few brands that offer shock absorbers and suspension products specially designed for fleet use. Bulldog shocks are not just built tough but also designed to save fleet owners time and money on repairs and replacement suspension parts. And if you’re planning to order Bulldog parts online, you can also enjoy big savings if you order them at FinditParts.com. Here at FinditParts, we offer Bulldog aftermarket suspension parts at very competitive prices. Whether it’s heavy duty shocks, cab shocks, or dampeners, we offer an extensive selection of Bulldog products for you to choose from.

FinditParts offers a one-stop shop for truck parts and accessories, whether it’s for scheduled maintenance, emergency repairs, or just looking for new parts to upgrade your rig. From OEM to aftermarket components, we offer a huge catalog of parts for both old and new truck models and those for buses, agricultural tractors, and other types of medium to heavy duty commercial vehicles. Simply enter the product name, number, and reference ID, and we’ll find the part for you to check out. All of our products are guaranteed to be 100% genuine and comply with international quality, safety, and environmental standards.