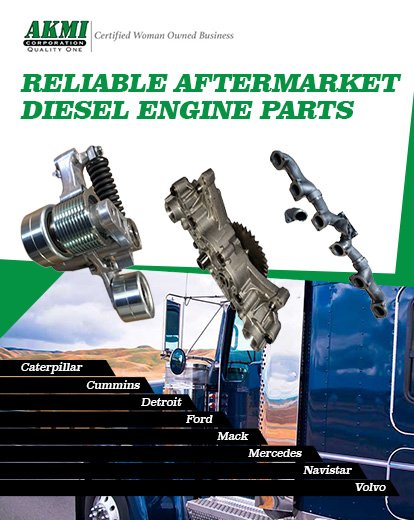 If it runs on diesel, it runs on AKMI. AKMI produces a wide range of pieces, parts, and hardware for world of diesel, including engine components and engine parts. With just about 4 decades of innovation under its belt, AKMI has become one of the top-of-the-line brands for producing OEM or aftermarket engine components.

AKMI was founded in 1981 and has a source of industry-changing innovation ever since. The company pours countless millions of dollars into the research and development, manufacturing, and distribution of diesel engines. That covers just about everything from personal pickup trucks to heavy-duty big rigs, though the company's emphasis is on the latter.

Not only does AKMI produce its own products, but it also works closely with several other partner brands in order to produce OEM-compatible parts under its partners' names. A few of those partners include Aftermarket Cummins, Caterpillar, Aftermarket Detroit Diesel, Kenworth, International/Navistar, and Mack/Volvo. Of course, there are plenty more than just those.

Since AKMI has partnered with many original equipment manufacturers, the company's products tend to be free from the biggest problem that plagues manufactures the world over: the compatibility issue. With so many OEMs freely sharing their specifications with AKMI, producing OEM-compatible pieces, parts, and hardware is a breeze. That makes it incredibly easy to find a part that fits right into your engine either the same as or better than your original part.