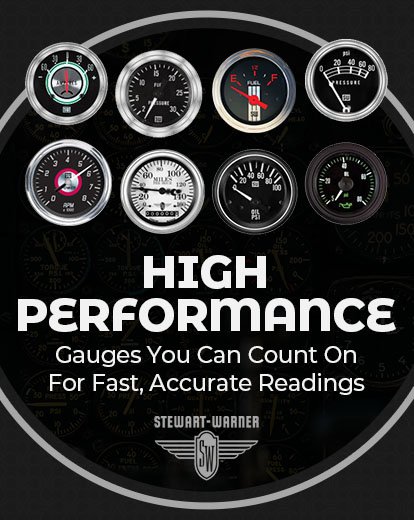 Now a brand of Maxima Technologies, Stewart Warner is perhaps the most recognized name in vehicle instruments in the history of the U.S. automotive industry. In fact, the brand -dates back to 1905 when John Stewart founded Stewart & Clark Company. Stewart brand speedometers were first used on original Ford Model Ts, after which the company established itself as a market leading supplier of instruments. Seven years later, in 1912, Stewart and Edgar Bassick joined forces to create a new company to manufacture vehicle instruments and horns. Bassick, whose acquisitions included the Alemite Company, and Stewart also acquired the Warner Company and, as such, the Stewart-Warner Instrument Corporation was born. Started in Chicago, the firm erected a manufacturing plant on Diversey and- over time, the operation expanded outwardly in all four directions, thus becoming a massive complex with over one-million square feet and six floors, and many product divisions in addition to the instruments Division. Prominently situated in the middle of the factory, towards the front, was a huge clock tower featuring the words "Stewart" and Warner". Off to the right was another tower, also featuring the words Stewart Warner, that could be seen for miles around. Today, the old clock resides in front of an apartment complex on Diversey as the only reminder of this once sprawling facility. Over the years, Stewart Warner Corporation's Instruments Division supplied a majority of the instruments, hourmeters and senders used by not only the automotive industry, but also by the heavy-truck and off-highway markets. The Instruments Division assets were eventually sold to a company that named itself Stewart Warner Instruments Corporation - whose assets were, in turn, acquired by the company that became today's Maxima Technologies. To honor this rich heritage, Maxima is proud to use Stewart Warner as one of it's brands. Browse our extensive Stewart Warner gauges catalog to find the parts you need today!